Vladimir Putin for governor of Alabama. Wow! is this a story! 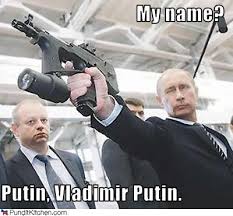 YOU BETTER BELIEVE IT!


Vladimir Putin is a perfect Alabama politician, or could be, he's a breathing beefcake example of one.

He's a macho man who loves his guns. He loves to confound President Obama. And Putin is so anti-gay he makes Mohammad Alli look like Liberace.

In Russia, anyone suspected of being homosexual or pro-gay can be put in jail.

We're not sure when these anti-gay feelings flamed up, but it's said Putin was "really weirded out" when President George W. Bush looked into his eyes and saw his soul.

"If I had a lab for making political candidates," said one of Alabama's least-known, most secretive political consultants, "I'd make every batch from the Putin recipe. He's beautiful!"

"How ever the Russian thing is a problem," he said , admiring the of smoke above his head as he puffed a cigarette.

"With the right political consultant ... are Alabamians ready for the real deal – a Russian candidate? Putin may be a little too red even for this exceptional red state.

If a full moon was rising I'd believe this, however it's just an average night so I'll leave this story for you to judge.