My thanks to Professor Damien Kingsbury for his input.

Indonesia and Australian relationship.
Where do we go from here?


The otherwise unstable relationship has been marked by brief periods of stability. A few years of good relationships has made Australia lazy, they didn't have to work at the relationship and they didn't.
However Indonesia is always highly sensitive around issues of sovereignty, they didn't like the Abbott government’s policy of paying villagers for information about people smugglers or the idea of of buying potential people-smuggler boats.
Now we have the spying issue. How has the  Coalition handled it, well you would not say with diplomacy, in fact you would have to say amateurishly.
Instead of offering to look into the matter and to deal with it in a diplomatically what do we have, a bull in china shop attitude(we don't answer questions about intelligence).
Making an election promise without first talking to the principal who is affected, Indonesia,  was really stupid and not really thought through.

The Coalition government is quickly learning, the difference between  election promises and governing.
I am no fan of Alexanda Downer however I'll bet he is shuddering at the Coalitions handling of these matters.
Our relationship was officially described, on both sides, as the best it has ever been. Now I'm not so sure, the Coalition is now on a steep learning curve and I hope for our sake they can accept advice from our diplomatic core  and stop blundering about as if Indonesia is the government of Australia and they are still in Opposition.
Indonesia has long had suspicions about Australia’s intentions, there are many senior Indonesian politicians who still hold those views, they think they are now being confirmed.
The government’s “bull in a china shop” attitude to diplomacy is going to test Indonesia’s patience.
"How one is seen to act is as important as the act itself." 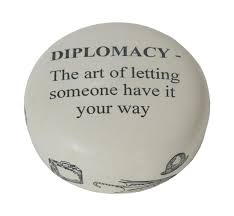