TONY ABBOTT HAS HIS HEAD IN THE SAND
The Coalition has proved itself to be a denier of climate science after its decision not to send a minister to United Nations climate change talks in Poland.

Why should we be surprises in the slightest, Tony Abbott has never shown any acceptance of the science behind climate change.
Australia is a joke, by not sending a minister we are indicating our lack of interest in the subject.
Just recently we've heard John Howard tell a London audience that those of us who accept that climate change is real are a bunch of ‘religious zealots’, and that he'd rather trust his ‘instinct’ rather than the the world's climate scientists.
Then we had our PM Tony Abbott accuse the United Nations climate chief of ‘talking through her hat’.
Tony Abbott just doesn't believe in climate change. 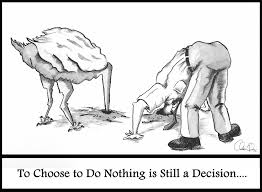