"I suppose he's good for something after all."
Abbott had to put a choker on Pyne or have him put to sleep.


Smiling and chortling as he fought off opposition attacks in Parliament on Monday, Christopher Pyne brought to mind the adage that politics is like sex - you don't have to be good at it to enjoy it.
The federal Education Minister has created an A-grade political botch-up. Tony Abbott has had to intervene to rescue Australian schools from confusion and financial loss and his government from political calamity.
It's hard to see what Pyne was looking so pleased about, he was like a puppy that who ate your slipper, he couldn't see what he'd done wrong.
Advertisement
What were the most damning indictments that Tony Abbott made of the two Labor governments that preceded him?
That they suffered from ''chaos and dysfunction'' and that they broke a core promise - they ''lied''.

Pyne delivered exactly the same thing. He announced three versions of the one policy in the space of a week.
He threw thousands of schools into complete confusion about how much money they would have in a new school year just eight weeks away.

He brought a heap of anger down on his government because he is incapable of thinking before he opens his mouth, it did not matter while he was in opposition but now it's a different ball game.
Why would he do such a thing, well he's so used to barking at anything he can't help himself. Christopher Pyne is all about Christopher Pyne getting maximum exposure.

Christopher had better be more careful in the future because he is expendable, Tony Abbott will not allow his government to be made to look to out of control like the previous one.


Is this a future note in Abbott's diary 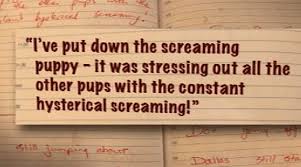