(Aussie slang)
SPIT the DUMMY
To balk at,Get angry about or simply refuse to do something.
A dummy is a pacifier
When a baby spits the dummy it just can't be pacified. 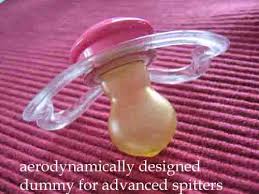 Abbott has a dummy spit again, why, well it appears that the dastardly ABC is just reporting allegations that are nothing but allegations, that's reporting the news isn't it?

Democracy and free speech are supposed to be part of the core values of the Coalition, yet we see over and over this same Coalition attacking our ABC.

Why, because the ABC cannot fight back.
They apparently also find some other newspapers rather annoying, however they don't want antagonise them to much or they will fight back.

Have we ever heard them attack any of the News Ltd organisation's media, NO.

I wonder could it be because this organisation has long since given up reporting on anything that might be embarrassing to the Coalition. In the Coalition's eyes they are the only papers that do true journalism and anything that deviates from that norm is considered ant-government.

Balanced reporting is reporting that does not offend them it seems, yet in the recent passed who are the ones that cancel press conferences and leave reporters with no alternative other than trying to guess what is really happening.

It seems to me that they would rather have a one party system, that way they could muzzle the press completely and could legislate to exclude any dissent by the public.

To me that sounds like a dictatorship or Communist state.
Hey, what am I saying this is Australia isn't it?
at January 29, 2014