Australia's new government, there seems to be a pong somewhere.

THIS GOVERNMENT ON 'P' PLATES
TRAVELLING WITHOUT A LICENSED DRIVER.
It takes only a few minutes of research to find that the 'carbon tax' has in reality, had very little effect on the average wage earner.

The Coalition had us believe that it has increased the cost of power etc and many voters have swallowed there mindless rhetoric, hook, line, sinker, bait, and hell, they've even eaten the rod and reel!
Do you remember the rants? Wyalla wiped off the map, $100 lamb roasts, What rubbish!

Someone once said that voting for Abbott over Labor is like eating a shit sandwich because you don't like broccolli!!

There's definitely something shitty in what we are being served up!


As for a million new jobs that Mathias says he will create, it smells just like the well known lamb roast cooking again, can't you smell it, mind you it could be just a fish going off!
Mathias Cormann(the conman's) promises forget the facts.

1:  That this is five years away(they have to win the next election)
2:  They intend to loose approx 14 to 28 thousand public servants.
3:  They are dropping support for clean energy this means more job losses.
4:  They are about to pay the rich twice as much as the average person for child care.
Mr Abbott is indeed still on P plates, he's relying on the the old adage that what you do early in your first term in government is forgotten, well Tony this is 2014 people aren't dumb anymore wake, up or your a one term PM. 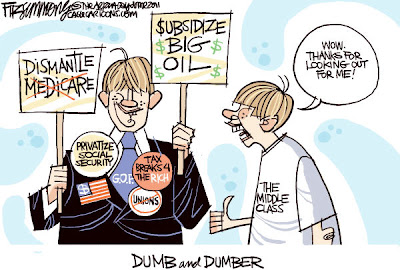 YES IT'S AN AMERICAN CARTOON
JUST SUBSTITUTE AUSTRALIA, WHAT DO YOU RECKON?