Honest open government....THIS DOES NOT COMPUTE!!! If it's good policy why hide it? AT CHRISTMAS TIME?

HEADLINE
GOVERNMENT HIDES POLICIES,WHY?
BECAUSE THEY ALL DO IT!!

And then:
Minister Nigel Scullion had told the peak aboriginal body – National Congress of Australia's First Peoples – that it should prepare to survive without $15 million funding promised by Labor.

Minister Mr Morrison told journalists this would be his last question and answer session for the year and he would be issuing written statements instead.
It was assumed this was a holiday arrangement, but the following week the Immigration Minister's office insisted Mr Morrison was not on leave and would not say when or whether the briefings would resume.

Perhaps the hapless politicians who missed the opportunity to dump their sad tidings will have more luck if we a have national disaster of some sort to cover their own disturbing news in 2014. 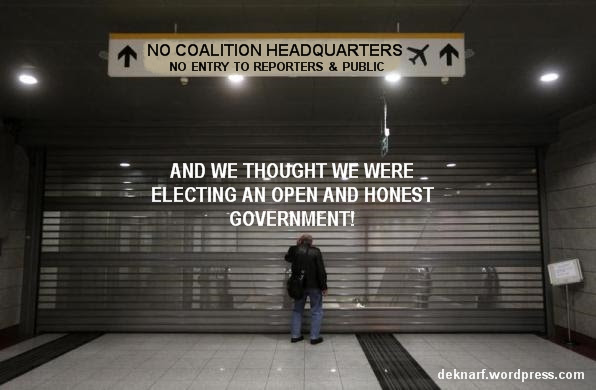 WE WERE HONEST BEFORE THE ELECTION!!!
NOW WE'RE IN GOVERNMENT.
SO SUCK ON THIS!