Tony Abbott defends Scott Morrison's, why nobody knows it's as if he has no replacement.

Surely Morrison has done enough damage to Australia, the language he used when referring to Indonesia and turning back the boats and now our reputation around the world with his stupid comments about someone murdered in our custody being the same as them drowning at sea.

Prime Minister Tony Abbott has defended Immigration Minister Scott Morrison's bungled information about the death and violence on Manus Island, adding that there was "very little damage" to the detention centre and that the riot had been "dealt with".

He only mentioned someones death in reply to a question.

This is the same Tony Abbott that said he would show us a so a soft and caring PM if elected, rubbish, its was all about getting power and now its what he can get away with , he is no better than many that have been before him.

Mr Abbott also rejected any suggestions he might have lost confidence in the Immigration Minister, saying Mr Morrison was "strong and decent" and that Australians would not want a "wimp" defending their borders.

Maybe the question should have been, have you lost control of Mr Morrison.

"He’s doing a great job for our country. You don’t want a wimp running border protection, you want someone who is strong, who is decent and Scott Morrison is both strong and decent."

Tony Abbott you didn't mention honesty when referring to Mr Morrison I notice but then I suppose that's not a high priority is it. 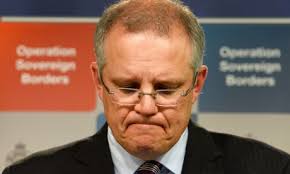