Who the hell did we elect. JECKEL or HIDE!

WE ARE THE GREATEST, WE ARE GREAT MONEY MANAGERS 'They told us so'
It looks as if they are about to create a GFC all on of our own!
Managers manage people not just money, someone forgot to tell them that.
"Elect us because we are the best money managers, we were born to rule" so they said.

This Coalition is now presiding over the highest unemployment in years and that is before SPC, HOLDEN and FORD shed most of their workers.
(Late news Vic government bails out SPC 3 pm est)

They don't seem realize that government is not just about business, it's about people.

The first term is when you hit them(the electors) in the groin, then they forget about it by the next election.

No, not this time because all these job losses will happen towards the end of their watch and they can't blame the opposition two years form now.

This could be a one term government, it's unbelievable that they could show no compassion this early, people are worried about what to comes next.

They say a fortnight is a long time in politics, they also say that three year terms are not long enough, what do they mean by that?

Well if something annoys the electorate deeply they will remember, and you'll pay dearly in a three year term, whereas four years could give you a bit of leeway. 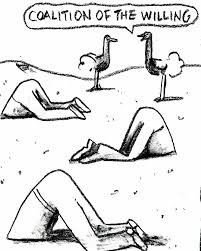