I AM THE FAT CONTROLLER 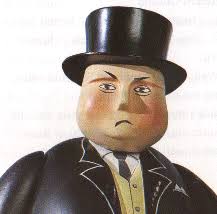 I CAN CONTROL WHAT YOU THINK
BECAUSE I CAN!
Arts groups refusing tobacco funding may be penalised, says the Fat Controller.

The Australia Council has been asked to create a new policy punishing ‘unreasonable’ refusal of corporate sponsorship.

George Brandis Arts Minister wants to penalise arts companies and festivals for refusing funding from a tobacco company under a new policy he has asked the Australia Council to create.
The 'Fat Controller' has said that Arts organisations could be penalised with a reduction or refusal of federal funding if they reject sponsorship from corporate sponsors on “unreasonable” grounds under the policy being developed.
This all came about after Bienale Sydney parted ways with Transfield and after artists objected to the company’s links to Transfield Services, a contractor at Manus Island detention centre.
Brandis said he could not rule out penalties applying to arts festivals and companies which refused funding from tobacco companies.
When asked if refusing money from a tobacco company would be classed as unreasonable he said “I myself don’t think an arts company should reject
bona fide arts sponsorship from commercially sound prospective partners on political grounds.”In other words what he is saying is if they've got big bucks you must take it!
If the policy Australia Council develops does not satisfy Brandis he has already said he will force the council to adopt one up to his standards.
The next we will have is thought police checking our thoughts to see if we harbour any bad feelings towards  Maca's, KFC, Kellogg's and News Ltd.
at March 15, 2014