Do politicians lie? Of course they do

DO POLITICIAN LIE?
DO DUCKS QUACK!


Do politicians lie?  Of course they do,  including, of course our Prime Minister Tony Abbott is leading the field. In second place is Joe Hockey.

Whether it's the manufacturing of a budget "crisis", or trashing election promises, pretending that taxes are anything-but-taxes and lying about lying.

Abbott has demonstrated his leadership in the lying stakes.
No need to go into detail here, Mike Carlton has already documented much of the fibbing, then there is Annabel Crabb, Laurie Oakes and Bernard Keane

That's pretty well every political commentator who isn't glued onto the Liberal Party.

The Prime Minister leads a fine cabinet  'The Companions of Liars', including in third place the Minister for the Destruction of Education, Christopher Pyne. A "unity ticket" on the Gonski education reforms????

No he's just airbrushing of history to create yet another lie.

The largest lie is-- Abbott is leading a conservative government.

No,no,no. In fact, Australia is being pummelled by American-style, dog-eat-dog radicals who do not know what being Australian is all about.

ABBOTT IS KILLING THE 'FAIR GO' IN AUSTRALIA'S PHYSIC

SUBSTITUTING IT FOR THE DOG EAT DOG ATTITUDE OF AMERICA. 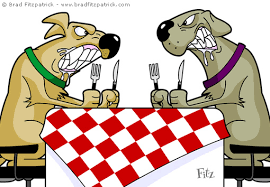