Extreme Right Wing Alive and well in Australia and about to sit in the senate.
Never mind PUP these guys are frightening! 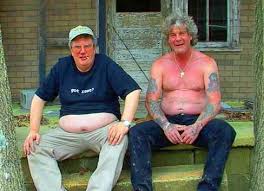 Welcome you good o'l Aussie boys
You boys can be just like us.
Wouldn't that be great!
In the Australian senate from July

The  Family First and the Liberal Democratic Party forming a ''voting bloc''.

David Leyonhjelm, the New South Wales senator-elect representing the Liberal Democrats says that he will vote in alliance with South Australia's Bob Day of Family First  from July 1.
They have agreed to vote together on all economic issues, but will decide their own positions on social issues.

On Mr Leyonhjelm's policy agenda is privatisation of schools and hospitals, a lower minimum wage and lower tobacco taxes.
We share the same values they say.

After a meeting, Mr Leyonhjelm said of Abbott: ''I quite like the guy, he speaks his mind, a bit like me.''

On Tuesday, Mr Day and Mr Leyonhjelm delivered speeches to the Centre for Independent Studies.

''I also intend to press buttons on health and education. There is no justification for the government being a service provider in these. It has a role to determine policy, set standards, monitor quality and inform the public. It does not need to own schools or hospitals, or to employ teachers, doctors or nurses.

When it comes to smaller government, Mr Leyonhjelm said: ''I do not draw the line anywhere.
''I have every intention of using my vote to try and make a difference. I will use argument, reason, pleading and occasionally blackmail.''