Shoe box for rent in London

Council refuses to allow shoebox 'studio flat' to be rented out

The apartment, advertised for £737 per month, has been ruled too small to meet legal requirements 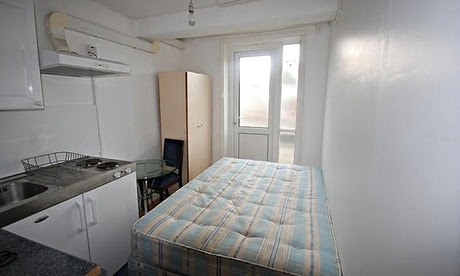 Shoebox studio flat in London rented for £170 a week. Photograph: rightmove.co.uk
A tiny studio flat described as a "rabbit hutch" that was up for rent at £737 per month has been taken off the market after inspectors ruled it was too small to meet legal requirements.
The apartment, which consisted of a bed in a kitchen, gained notoriety because it was said to highlight the state of the rental market in London. It was snapped up in less than 16 hours, despite the apparently high price.
But inspectors were called in and imposed an order on Thursday preventing it from being rented out, Islington Borough council's housing chief councilor James Murray said.
at June 06, 2014