First the adults and then???? 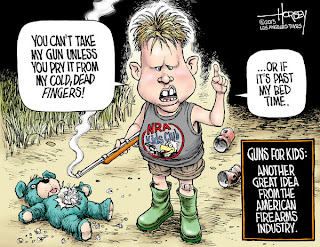 Detroit police chief James Craig has repeatedly called on “good” and “law-abiding” Detroiters to arm themselves against criminals in the city.

This city has the worst homicide rate among large American cities, Detroit experienced 12,935 burglaries last year.
With around 250,000 households, that means Detroiters have roughly a 1 in 20 chance of being burgled. To residents who have been victims of crime, being allowed to carry a weapon, whether openly or concealed, is not just reassuring, it’s part of the pragmatic reality of living in the Motor City.
Wayne County, which encapsulates Detroit and its metro area, counted 83,950 active concealed-pistol permits as of 1 August 2014 – meaning one permit for every 21 households.
The city, strapped for cash, has only 2,300 police officers – unchanged from a year ago, before the bankruptcy, but still not enough.
Michigan passed a self-defense act in 2006, referred to nationally as a “stand-your-ground-law”. The law removes an individual’s duty, when acting in self-defense, to retreat.
Instead, it allows individuals who have an “honest and reasonable belief” that they are in imminent fear for their life, serious bodily harm or sexual assault to use deadly force.
Skeptics have called this a “shoot-first” law.
ONLY IN AMERICA
at August 19, 2014