Based on an article
By Mike Peacock Edited by S.W.T.Read

Britain lose 5.3 million Scots.
Cameron asleep at the wheel!
Foreign governments and financial markets had long assumed Scots would view independence from the United Kingdom as too risky a leap but recent polls have exploded such complacency.Losing Scotland would likely  Britain as a power would be weakened and also self-confidence, it could become introverted.
An independent Scotland could join the European Union however the European Commission said Scotland would have to leave the EU and re-apply for membership.Even more telling could be Scotland's absence from the debate about whether the rest of the country should remain part of the bloc.The Scots are far more pro-EU than the English and should they secede in 2016 they would not get a say in the proposed 2017 referendum on Britain's place in Europe.Should Wales and Northern Ireland vote to leave the EU are the chances are greater. Without the Scots even though they only account for around 4 million of the UK's 45 million voters could tip the balance.---------Scottish independence could also alter the national politics in the rest of the country because the opposition center-left Labor party has 41 members of the Westminster parliament in Scottish seats while the center-right Conservatives have only one.
With these taken out of the equation and the chance of a Labor to win power looks daunting.The Scots will however will still vote in a British general election next year, which causes another uncertainty. If Labor won, its government might lose its parliamentary majority and fall within a year because the Scottish lawmakers would be off.
That loops back to EU membership since the Conservatives are committed to holding a plebiscite while Labor is not.-------Cameron would face pressure to quit if he lost Scotland and no wonder his attention to the Scottish vote has been a non event until now, to little to late, maybe, don't forget the full name of his party is the Conservative & Unionist Party.If Cameron were to go there would be a clamor among the many eurosceptics in his party, and those who fear UKIP will cost them their seats, for a more clearly anti-EU leader to take his place.That in turn could harden the chances of a British exit if a new Conservative leader would not campaign to stay in the bloc.Cameron seems to have miscalculated as the main parties scramble to promise Scots more autonomy if they vote "No".The constitutional genie is out of the bottle!

Scotland is bound to get more autonomy if it stays and Wales would almost inevitably demand more powers of its own and the so-called "West Lothian question".
Why should Scottish and Welsh parliamentarians be allowed to vote on laws that only affect England when English lawmakers cannot do the reverse?This could require a full-blown overhaul of the UK's constitutional settlement.What is certain is that minus Scotland, Britain would slip down the ranks from being the world's sixth largest economy.---------The long-term question is whether it should keep a seat on the U.N. Security Council and stay in the Group of Seven major economies at a time when power is shifting to the world's big emerging economies.---------Foreign direct investment without Scotland, those flows would fall and the rest of the UK's current account deficit could rise to a level that discomfits investors.A number of major Scottish-based financial companies could head south if Scotland goes it alone. The Royal Bank of Scotland said in June it was considering its options should Scotland vote for independence, adding that the vote had created a great deal of uncertainty. Lloyds Banking Group is considering having its registered office in London rather than Edinburgh if Scotland breaks away.---------The future of the nuclear submarines are seen by some as one of Scotland's main bargaining chips in getting what it wants in the 18 months of negotiations that would follow a "Yes" vote to work out how it leaves the United Kingdom. 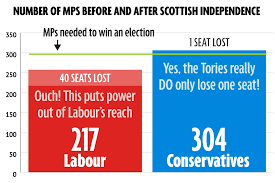 Labor to loose big time, for ever!!