Howard claims embarrassment after being conned by the US and UK to enter Iraq in 2003, was he blind or was it convenient. 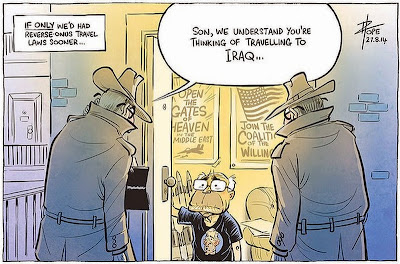 Howard blames everyone but himself
once again.

Weapons of mass destruction:-Howard said he was “embarrassed” that this information turned out to be a failure of intelligence, but he insisted the arguments mounted by senior political players ahead of the invasion were not “a deliberate deception.”
Apparently he has had his head permanently buried in the sand because as we all now know the intelligence was doctored to suit going to war.
Howard plays down the nexus between 2003 and the current instability in northern Iraq and Syria. Saying " If you’re seeking to locate the responsibilities for the situations in Iraq 2003 invasion, let me put to you Syria was not involved in any outside military operation.
He says "The Islamic State operation comes out of what is occurring in Syria, and to suggest that it’s purely or predominantly a result of what happened in Iraq in 2003 is a false reading of history.”
He sidestepped the question by mentioning Syria and won't admit that Iraq was debacle because they put a government in power that demonised half the population and which has contributed to the creation of the terrorist organisation 'The Islamic State'
There is one thing about Howard that has never changed, he can't say sorry and he will never admit to making a mistake.He just can't tell us the truth.
Its no wonder he supports Abbott  because Tony Abbott is a clone of himself, it is an obvious a trait that he also has, its always someone else at fault, never his or his governments fault. .
at September 22, 2014