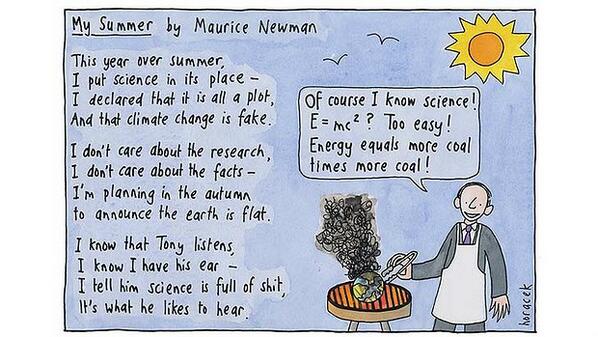 (A warming inquiry, I can't believe it, he's got to be joking. Ha,ha,ha.......)
Its true Maurice Newman, the prime minister’s business adviser, has called for a government-funded review of the Bureau of Meteorology (BoM) because he's suspicious of them showing a warming bias.
He has always questioned the findings of mainstream climate science, now he is accusing the Bureau of temperature manipulation.
He suggests they have corrupted the official temperature records by adjusting data and moving the location of temperature monitors to make it appear that Australia is warming.
Newman said that while the “BoM is a large and expensive agency, employing 1,700 people and costing more than $300 million a year to run”, it’s temperature record was “error-ridden”.
A staff member who has been at the BoM for more than a decade said the criticism of the bureau is “offensive” to employees and “It’s a kick in the guts, to be honest and it’s offensive to the professionalism and dedication that people show here day in, day out.
This government devalues science in every walk of life. The fact no-one is defending the bureau’s staff and the good work they do is a crime.”
Ask Australians on the land what they think of the Bureau and they'll tell how much they rely on them and how high they value them, as for their integrity, it's never questioned.
So now the Abbott government is questioning the integrity of  Britain’s Met Office and Nasa in the US, who agree with the Bureau. The unadjusted data and the homogenised data shows that Australia has warmed over the past century.
Thank god we have this Abbott government
why because I was almost convinced
that the world was round before they enlightened me.