Tax Office is not equipped to tackle billions of dollars stolen by multinationals and others in international tax dodging. 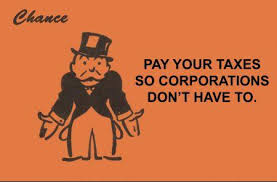 Stop billions of dollars stolen by multinationals and others in international tax dodging.

How, fix the laws, because our laws allow it to happen.

Whats Australia doing about it, its cutting 3000 ATO staff?

When Treasurer Joe Hockey is boasting about Australia's efforts in conjunction with the G20 to close international tax loopholes,we don't have a dedicated team to fight the problem.

Money flowing between Australian companies and their foreign subsidiaries has topped $270 billion, this is more than half of the Commonwealth Budget.

Many of the ATO's most experienced staff in tracking international profits have moved to the big four accounting firms, where they now advise these same companies on how to minimise their tax.

Inspector-General Ali Noroozi warned government the loss of key ATO experts in so-called "transfer pricing" posed risks to Commonwealth revenue.
Mr Noroozi's report has been sat on since it was delivered last December and not released until June 2, three weeks after Treasurer Joe Hockey announced savage cuts to the ATO in his first budget.(open government, its a joke)

Internationally, there are government and community concerns regarding risks to revenue arising from transfer pricing which is severely eroding revenue in the countries they're earning income from. This is profit shifting on a grand scale.

The shortfall in revenue is being being made up by hurting small to medium businesses and average workers, governments who are seen to be doing nothing on this front will pay at the ballot box.

The problem is becoming so obvious even blind Freddy can see it, every time governments slug the general public instead of tackling the problem they will pay a price.

Governments of all persuasions will ignore this situation at their peril.