Abbott's his truth is something to behold.

TRUTH
IT'S THE NEW HATE SPEECH
"During times of universal deceit, telling the truth becomes a revolutionary act" 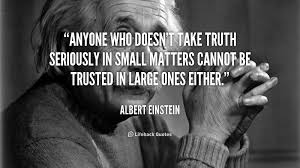 Abbott's his truth is something to behold, he has given a different meaning to the word.
His truth has left Australians trying understand how you can lie so convincingly without compunction.
(A feeling of guilt or moral scruple that prevents or follows the doing of something bad.)

Having pledged during the 2013 campaign that he would lead a government of no surprises and no excuses, there would be no cuts to health, education, pensions and the ABC, he has proceeded in office to do precisely the opposite.

There was the  extraordinary budget, with its wide-ranging cuts that made a mockery of everything he said were his election promises.

He said wanted to be known as the Prime Minister who keeps commitments.

He has so far treated the Australian electorate as if they didn't exist, all the rhetoric about open government and honesty has been thrown in the rubbish bin.(It was rubbish that was said to get elected)

To this day we the people know nothing about the man because his untruths have been monumental, nothing he says can believed.

Since the unfair 2014 budget, he has maintained with shameless effrontery that keeping promises is a priority for his government.

It's no wonder, then, that Abbott has become the first newly elected PM to miss out on a political honeymoon, he may also become a one term PM we can only hope.