Abbott has major problems of his own making. The elephant in the room is the perceived "unfairness" in the budget

YOU CAN'T KEEP IGNORING ME! 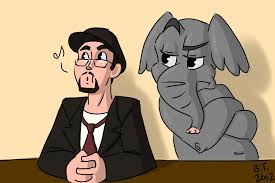 "Unfairness and Broken Promises"
They are hurting!


There are signs of growing disquiet inside both the federal Cabinet and the party-room over Abbott's office's political handling of both policy and his treatment of personnel across the public service.
Trouble often arrives in threes, his embattled Treasurer Joe Hockey is now in the ignominious position of beginning work on a second and necessarily tough budget while he is still lumbered with the failures of his first effort held up in the Senate for obvious reasons,'its unfairness'.
Tony Abbott and Joe have to come up with a new fix, they can't keep slugging the people who can least afford it, the load needs to be shown to be born across the board, if they can do that they should have less trouble in the Senate, commonsense should be shown by all.
A Deloitte Access Economics "Budget Monitor" report to be released on Monday, predicts "budget deficits as far as the eye can see" suggesting the Prime Minister's oft-stated promise of a budget back in the black by 2017-18 cannot now be achieved.
Sure its due to falling commodity prices – mainly iron ore – and also to Senate intransigence, however if they are clever enough to spread the hurt more evenly they would be more likely to achieve or come close to achieving their goal.
Its all about their ideology, they have to learn that they have to bend with the wind, there is an old saying, if you want to eat an elephant you have to eat a little at a time.
at December 01, 2014