Australian birds are out of their tree drunks, Zebra finches are Aussies aren't they?

'Drunk' birds slur their songs after being given alcohol - causing their tunes to be less defined.(This is research?)


Alcohol can turn the quietest of people into exhibitionists, who, with the help of a karaoke machine can belt out hits such as ‘I will survive’ at the top of their lungs while slurring the words.
Now, scientists have discovered that alcohol has a similar effect on birds, whose songs become slurred and less well defined when they are under the influence.
The birds were given spiked juice and their songs carefully analysed for the tell-tale hallmarks of drunkenness. 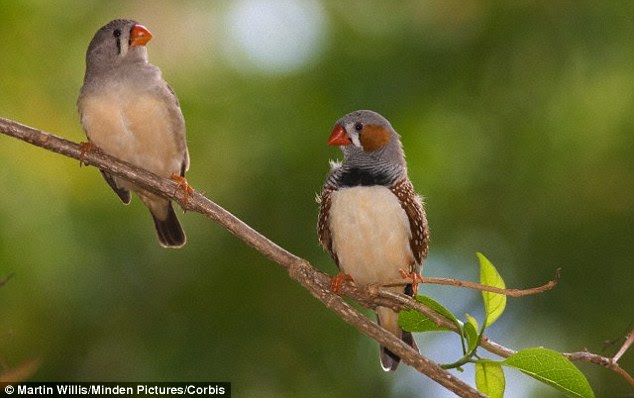 +3
The Birdie Song, or anything by Wings: Scientists gave zebra finches juice spiked with alcohol and analysed the effect on their songs, to find that they were slurred and quieter than usual

Christopher Olson, of Oregon Health and Science University described an experiment where zebra finches were given juice with six per cent alcohol, on National Public Radio’s All Things Considered show.
They wanted to explore whether alcohol affects the songs of birds in the same way it does humans.
Zebra finches are commonly used to model human vocal learning and unravel how people communicate.
Dr Olsen told broadcaster Arun Rath: 'At first we were thinking that they wouldn't drink on their own because, you know, a lot of animals just won't touch the stuff. But they seem to tolerate it pretty well and be somewhat willing to consume it.’