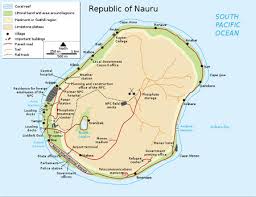 Republic of Nauru (formerly Pleasant Island) Land Area – 21 sq km – single raised coral atoll. Population – 10,085 (preliminary 2011 census
Allowing refugees to live a life of freedom on Nauru seemed a bright idea at first glance, however integration without community support does not work, it seems that out of sight out of mind is not working the way the Coalition hoped.

The island of Nauru is totally reliant on Australia so they agreed to take on these refugees but this is a tiny island and so is the population, they are a close knit society, you can't just dump strange people among them without working with the populace so that they will except these strangers.

Nauru's people are very friendly they are like one big family and like any family they don't take to strangers straight away, the release of these refugees among them without educating the locals is downright slack.

The Australian government has done just that and now they are realising that they can't just walk away and pretend that nothing is wrong.

Refugees living on Nauru say they want to return to camps due to violence | Australia news | The Guardian: