Mining on the Great Barrier Reef, is this the government's idea. Once again they are sneaking behind our backs for multinationals. 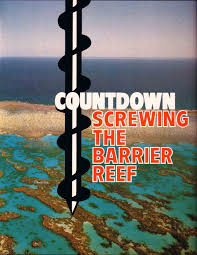 The Australian government is trying to stop us saving the Great Barrier Reef.
Why, is there an ulterior motive.
Lenore Taylor

Australia has embarked on a “whole of government” diplomatic and ministerial lobbying campaign to correct “misinformation” and prevent the Great Barrier Reef from being placed on the Unesco world heritage committee’s “in danger” list, a Senate committee has been told.
The environment minister Greg Hunt visited German environment minister and world heritage committee chair Maria Boehmer in January and Senate estimates heard on Thursday that ambassadors in all of the 21 countries on the committee had been enlisted in the lobbying effort, as well as consuls general and other staff.
“We have asked our ambassadors in countries that are on the world heritage committee, this is a whole of government effort, we will use our diplomatic resources to best effect,” said the secretary of the Department of Foreign Affairs and Trade Peter Varghese in response to questions from the Greens senator for Queensland and environment spokeswoman, Larissa Waters.
“There is currently a campaign to list the Great Barrier Reef as in danger; we are doing all that we can to ensure the campaign does not succeed,” he said.
“In the course of that campaign we think there are a number of assertions about the management of the Great Barrier Reef and its vulnerability which are not grounded in fact and which need to be rebutted".
This means mining on the Reef. Do we want it no, not ever. This government is crazy, we the people own the reef. Don't touch, it or else!!