IS IT TIME TO PASS THE HAT 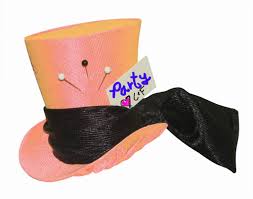 The Wonderland of politics

Verbal assaults are very much a part of the "polite bantering" in Wonderland.

Traumatic and verbal violence seems just about to erupt all the time, breaking through the thin veneer of civilized behavior, but it rarely does.
The Coalitions tea-party turns out to be a very mad tea-party. In attendance are the cabinet including Julie(Alice), Christopher(the March Hare), Tony(the Mad Hatter), and various cabinet Dormice.
All are indeed mad, except Julie(Alice) and the sleepy Dormice (who are only mad when they are awake).
Tea is served at six o'clock in the party room. But it is always six o'clock,  thus, it is always tea time. In fact, the significant feature about this tea-party is that time has been frozen still. The idea of real, moving, passing time is non-existent.
Those present can only look backwards in time.
The absense of time means that the Mad Tea-Party is trapped in a space without time. The world isn't turning, hands aren't moving around the clock, and the only "rotating" exists around the tea-party table.
When the they have finished tea, they move to the next place-setting around the table but there doesn't seem to be any substantive food for thought. No one even seems to be talking about reality.
Tony(The Mad Hatter) tells the cabinet that the people have accused him of murdering his friend Time; he says that since he and Time had a falling out, it has always been six o'clock. It's always tea time, and they have no time to wash the dishes between time for tea.
He is trying his best to cling to his own code of behavior (as always); he is still determined to "educate" the creatures to the rules of his own social etiquette.
The insanity of it all begins immediately when the Christopher(the March Hare) offers Tony wine that doesn't exist to ensure his place in cabinet. All the other members of the tea party except those who do not fear loosing their seats at the table also offer nonexistent wine to Tony.
----------------------------------------------
Will the members of the tea party who can see the wine is nonexistent invite other mice to a party of their own,will they have the Mad Hatter's hat removed and given to someone new.
The mice all over the country can see that the present Mad Hatter(Tony) can't tell the difference between real and nonexistent wine. These mice all know wine when they see it.