Could this be evident in Australia's leader. no names no pack drill? 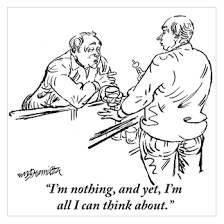 Narcissism is a double-edged sword: it can sometimes lead to increased confidence and the tendency to be perceived as leader like. But narcissism is also associated with negative characteristics, such as a lack of empathy, aggression, a tendency to selfishly exploit others and also shows its self as not being able to take criticism. Freud asserted that women were more narcissistic than men, based on his personal observation that women were more preoccupied with their physical beauty.
But research shows that men tend to be slightly more narcissistic. The magnitude of this difference is comparable to the kind observed in other personality traits, such as neuroticism (women are higher) and risk-taking (men are higher).
Narcissism is associated with leadership emergence, this raises the possibility that men’s greater narcissism is one of the reasons why men are more likely than women to obtain senior leadership roles.

The leadership/authority dimension taps into a motivation to lead and desire to obtain positions of power, and is measured by questions such as “I like having authority over other people.”