Ban cats: Cats should be banned from all suburbs in the ACT unless in a controlled environment.

YOUR CAT IS ONLY A PET WHEN AT HOME. 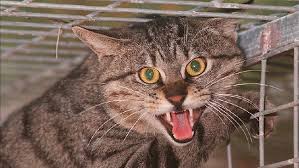 Stop this menace before native animals disappear from our backyards and open spaces.

Pussycats are supposed to be pets but their owners have let them multiply and become a threat to our native animals. If we can't lock up the owners we MUST lock up the pussycats.

ACT Wildlife, which treated 47 animals injured in cat attacks over the past year, supports conservationists calls for wider cat containment across the territory.
Birds were the biggest casualty, while cats also attacked lizards, an echidna, a possum and an antechinus (native marsupial mouse). Research in 1997 indicated pet cats in Canberra killed more than 67 different species, and between 380,000 and 600,000 animals each year.
Containment laws which require cats to be confined to their owner's property apply in Bonner, Coombs, Crace, Denman Prospect, Forde, Lawson, Molonglo, The Fair at Watson, Wright and Moncrieff.  Jacka will become a cat containment area from January, 2017.
The Conservation Council ACT region, scientists and former chief minister Jon Stanhope are calling for more suburbs to be declared cat containment areas. But some cat owners say this is ill-considered, that  their pets are being singled out, or that problems with roaming cats are secondary to loss of habitat for wildlife, uncontrolled dogs and people not desexing their cats.
ACT Wildlife is newly formed with a membership of 100 people who include carers, and expects to increase numbers through training for wildlife first aid. It often receives referrals from the RSPCA
Publicity officer Emily Birks said many of the animals injured by cats had suffered puncture wounds. "Cats bite down  with their incisors and shake their prey, so there are often internal injuries."
Ms Birks said that as well as animals brought in for care, another 38 people called over the past year with native animals severely injured by cats. "In this case we referred them straight to a vet as their injuries were too excessive to be rehabilitated," she said.
"Of the 47 animals ACT Wildlife took into care, 32 died or were euthanased, 12 were released and several are still in care," Ms Birks said.
"Even an animal with minor injuries is likely going to need to be treated with a course of antibiotics due to the huge amount of bacteria in and on cats mouths and claws."
Ms Birks said cat containment suburbs were effective. "In our records, there are no reported native animal attacks in suburbs with cat containment policies. That it also helps protect the cats themselves is a really good thing.
at April 08, 2015