Murder:- A frustrated man charged by police after shooting his uncooperative computer.

A WARNING TO TROUBLESOME COMPUTERS
THIS COULD BE YOU! 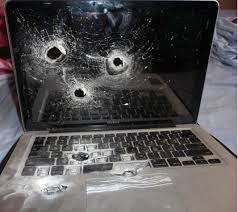 Police in Colorado Springs responded to a ‘shots fired’ call on Monday.

Police in Colorado have cited a 37-year-old man for carrying his computer into an alley then shooting it eight times with a handgun after what authorities said had been a long battle with the uncooperative machine.(I can appreciate the feeling of satisfaction after such an accompishment)

Lucas Hinch was cited for discharging a firearm within city limits after officers responded to a “shots fired” call early on Monday evening, the Colorado Springs police department said.

“Investigation revealed a resident was fed up with fighting his computer for the last several months,” a police statement entitled “Man Kills His Computer” said.

The Colorado Springs Gazette quoted police as saying Hinch had been good-natured about the citation, telling officers he had not realised he was breaking the law.

A judge will decide what penalty the citation carries.
at April 22, 2015