The independent adviser? Warns Hockey that the unilateral introduction of tax on multinationals might be challenged. 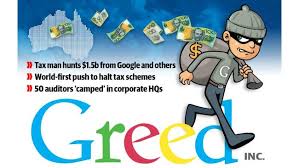 CAN WE EVER BE FIRST AT ANYTHING?

Mr Hockey is playing this tax card as hard as he can to win back some credibility, he has public support to force multinationals such as Apple, Google and Microsoft to pay their fair share of tax in Australia.


Treasurer Joe Hockey's assault on multinational profit-shifting – a so-called "Google tax" – risks breaking Australia's international tax treaties, the Parliamentary Budget Office has found.
This would be no surprise to Joe, he is selling the idea because he knows the public like to hear the government is doing the right thing by them. I think this is a red herring, I don't think he has any attention to fix this tax evasion, its a thought bubble that sounds good and doesn't hurt his image.
Multinationals have no allegiance to any country or government, they are about playing countries against one another.
The independent adviser(multinational) warned that the unilateral introduction of a "diverted profits tax" like ones being considered by Australia and Britain could provoke revenge taxes being imposed on Australian businesses operating overseas.
Google paid a paltry $295,000 in tax last year despite estimated earnings in Australia of $2 billion. At the same time, the tech giant pocketed $4.5 million from the tax man in "research and development offsets".
Joe has labelled profit-shifting companies "thieves" and "cheats" in recent days and we would all agree.
Now Joe's card has been played all has say when it fails is its not my fault, the rest of the world is at fault. Its a bit like carbon tax, we can't be first said Coalition.
Mr Hockey has already said that Australia did not wish to be a leader on the international tax scene, indeed Joe you never want to be first at anything.
Fairfax Media revealed on Wednesday that the biggest 900 companies reduced their total tax bills by $25 billion through tax deductions, exemptions and other concessions.
I personally don't believe either of the major parties in Australia have the guts to take on the multinationals.
at April 02, 2015