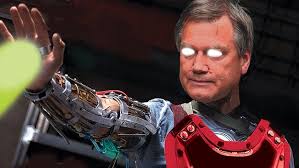 Bolt is tearing us apart


Why would I write a anything about Bolt, well because I can't stand robot like people who are willing to spend their days continuously writing such drivel.

Andrew I believe is an alien who has yet to understand humanity on our planet, his robot like comments never vary, they appear to have been loaded into his robotic brain before the start button was first pressed.

Darth Vader(part robot) at least sounds human, where as poor Andrew keeps repeating the same things over and over. It's obviously a computer malfunction. Perhaps there is an update due for his memory banks.

I will not detail my thoughts about Andrews views however former editor Paul Kelly claimed Bolt was actually spreading “poison” with his “extreme” and “xenophobic” position. He suggested his employers should think about reigning him in.

We have all heard how he reacts when anyone that disagrees with his robotic brain, its a common fault in this model of robot, he needs an upgrade if its not already to late.

IT DOES NOT COMPUTE