Agriculture Minister Barnaby Joyce removes the brains to be replaced by sheep?

YOU'LL ONLY SAY NO TO ME ONCE 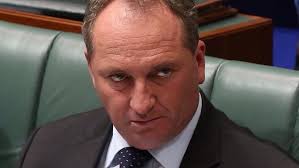 Another senior public servant from the Agriculture Department has been shown the door in the wake of the sacking of the department's boss, Paul Grimes.

One of the department's deputy secretaries, the highly regarded Rona Mellor, has been told by new secretary Daryl Quinlivan that she has no future in her job.

This move against Ms Mellor comes despite the senior bureaucrat being awarded the Public Service Medal just two years ago, partly as recognition of her work for the department on Australia's border bio security which I thought was one of Barnaby's pet projects.

Perhaps Barnaby is unable to take advice from anyone who ideas that differ from his own.

Unlike Mr Grimes, who was summarily sacked by Prime Minister Tony Abbott after the breakdown in the relationship between the well-respected bureaucrat and Agriculture Minister Barnaby Joyce, Ms Mellor has not been sacked yet.

It appears Mr Quinlivan who I think was appointed by Barnaby is wanting to bring an executive of his own choosing probable people who say yes to often.

The forcing out of Ms Mellor, a highly regarded leader, means more instability at the top of a department still reeling from the sacking of its popular boss.

Apparently no-one at the Agriculture Department would be interviewed for this story and the department's publicity unit refused to answer questions,I wonder why???