Costello is in La,La land. Abbott can't see the wood for the trees. Not our fault says Joe Hockey. 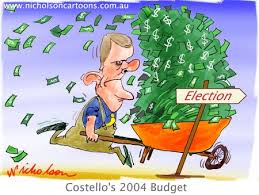 HOW PETER COSTELLO LEFT A LEGACY
FOR ABBOTT AND HOCKEY

Based on an article by Richard Denniss

Costello says Rudd had nothing to do with saving us from the GFC it was all done by China's growth. Dream on Peter what planet are you on?

The IMF now tells us  how Mr Costello's 2003 budget and the budgets between 2005 and 2007 were Australia's most big spending in the past 50 years. They were expensive and the inequitable tax cuts force the RBA to increase interest rates at the time and guess what they caused Joe Hockey's current budget deficits.

The guru Costello caused most of the problems we now have today, in other words we are paying for his extreme generosity.
Our economic problems are inextricably linked to the decisions made by Mr Costello back when the economy was booming.

His halving of the capital gains tax is playing a major role in the current housing boom.
The tax concessions for superannuation is costing the budget tens of billions of dollars. Not to mention his subsidies for mining companies, that poured fuel on the mining boom fire and pushed up the dollar, driving manufacturing offshore.

His version of history relies on magic, he directed the focus elsewhere while he pulled something out of his sleeve. He had the public to focus on the existence of any budget surplus no matter how small this distracted us from the real issue of the size of that surplus.

No doubt Costello delivered surpluses, yet the IMF makes clear that his enormous and inequitable tax cuts were unaffordable and that his surpluses weren't big enough given the strength of the boom he was riding.

There are people, like Mr Costello and Tony Abbott who believe that good things happen to good people and that booms are the reward for voting liberal?

Costello left us something alright, a lead weight and this present government is terrified, terrified of doing what is required, they must get rid of Costello's largess Australia cannot afford it!
La, La land

Mr Costello seems to genuinely believe that had he remained treasurer there would have been no GFC, no massive slowdown in the world economy and no budget deficits.
at June 09, 2015