Australian dunny tax? Yes it could happen if the gov't doesn't do it the multinationals will.

This could be coming to a dunny near you, beware Australia!

Based n an article by Jeff Sparrow ‘Marx insisted an alternative to capitalism must be based on the innovations that capitalism has made possible – or else, he warned, “the old crap would revive”.’ Photograph: Tristram Kenton for the Guardian

Meet Looie: it’s like Uber you no the not taxi people, but this is for bodily functions. Looie is a new app that promises you access (for a fee, naturally) to private toilets, all of which have been certified for hygiene and cleanliness.

“You’re getting a consistent, amazing experience all the time,” explained Looie founder Yezin Al-Qaysi earlier this year. “You won’t have to flush because now its automatic.”
Reacting to the poor offering of public amenities, they are filling the gap where government provisions fail

Whether this particular venture will take off is anyone’s guess. The Looie website now seems ominously quiet. But even if Al-Qaysi’s project proves a busted flush that is flushed away quickly, the concept’s an obvious application of the logic behind the so-called “sharing economy”, where digital technology gets fused with user-pays economics so as to marketise personal services.

Toilets have been here before. That history helps us think about the contradictory nature of the sharing economy.

Aaron Gordon explains how, in the early years of the 20th century, American train stations often featured the only modern plumbing in town.
To keep the public out of its privies, rail magnates took to restricting access, first with a key and later via coin-operated locks. The technology quickly spread, as other corporations seized the chance to make big money from the littlest room.

On the one hand, Uber is wildly popular, on the verge of world domination. On the other, a backlash is mounting too, with (sometimes quite violent) protests against Uber in Paris, Madrid, Barcelona, Berlin, Rome, Milan, Mexico City and London.
1970, America had over 50,000 pay toilets, scattered throughout airports, bus depots and other public places, how many now is anyone's guess. 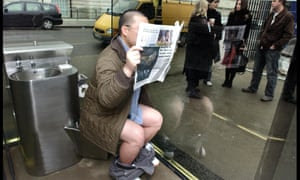 A toilet inside a cube made of one-way glass. Is this the future. Photograph: Martin Godwin

The toilet moguls soon found themselves facing off against a grassroots campaign to free the dunnies.

"Pay toilets are unjust infringements on our basic human rights,” they said, The Ceptia activist group formed in 1970. “Elimination is an important body function that must take place, to pay or not to pay is not a question that needs an answer.”
Its publication The Free Toilet Paper, the masthead carried the slogan
“Flush for Freedom”.

Their anthem insisted: “We’ll work until we know / that toilets are free where-e’er we go / We’ll flush them out! / We’ll wipe them out! / We pledge, O Ceptia!

I have tried to contact Ceptia, so far I have been unsuccessful, I thought the group might have some tactics we could use.
I believe its coming and we must be prepared because Australians love their dunnies, to pay for a crap is crap. Be alert!!!
at August 23, 2015