Australia's social security system Centrelink:- Is it deliberately blocking users ability to use its services 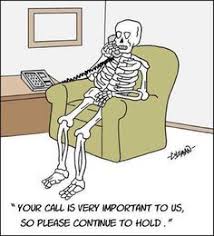 The number of calls to Centrelink that have gone unanswered has increased by 61 per cent to 22 million calls a year, with bureaucrats trying to blame smartphone dialing apps.

The number of "blocked" calls, when callers receive an engaged tone, is up from 13.7 million calls in the 2013-14 financial year.

Centrelink said it was an issue the agency had been attempting to manage. This is the same answer the gave at the last years Senate hearing. Managing the problem has resulted in 13.7 becoming 22 million.

They are blaming new technology with people calling at peak demand times."

So now we hear that 13.7 million has now swelled to 22 million, are they seriously trying to fix the problem, I think not.

It appears that Centrelink has no interest in taking further action in driving down the worrying statistic.

The Government is happy to paint pensioners and people on income support as 'dole bludgers', having infrastructure in place that clearly can't cope with demand shows it is the governments intention to do nothing because these people that try to use the system are considered second rate citizens.
at October 24, 2015