Australia:- Compliance non existent for visa holders. Get a visa and disappear , how many illegals are there, we have no idea. Never mind boat people.

Based on an article in Canberra Times

The secretary of the Department of Immigration and Border Protection, Michael Pezzullo. Photo: Alex Ellinghausen
A damning audit of the federal government's visa management system has found a litany of weaknesses undermining efforts to locate people who overstay, work illegally or commit serious crimes.

It has found faults in almost all aspects of the Department of Immigration and Border Protection's visa compliance processes. In the past decade, the department has attempted to improve its performance, the audit found little evidence of success, with "initiatives seldom fully implemented or evaluated".

"The department does not currently have an effective risk and intelligence function supporting visa compliance," these weaknesses undermine the department's capacity to effectively manage the risk of visa holders not complying with their visa conditions: from simple overstaying through illegal working to committing serious crimes."

More than 7.5 million visas were approved by the department in the last financial year.

Last year, the department absorbed the former Australian Customs and Border Protection Service to create the Australian Border Force with new procedures. At this time it appears the department's risk, fraud and integrity division was abolished and a further restructure was likely within four years.

The department's most recent attempt to improve data quality was abandoned a few months after it was launched.

Weaknesses were also found in four key corporate functions supporting visa compliance, including a lack of appropriate guidelines for staff.

Internal audit reports seems to have identified that they don't have any idea how to operate effectively.

Problems with the electronic record management system have been identified for many years, nothing has been done to rectify its shortcomings. The system now represents a risk to the department as records are difficult to locate or cannot be found."(in other words lost)

As for the operation of field teams, they were also criticised amid weaknesses in almost all aspects of operations.

The audit criticised an "ad hoc" use of management reports, the absence of appropriate indicators to measure performance, and operational differences between states and territories.

In a response to the audit, the department accepted its four recommendations.

A considerable amount of work was being done to improve a new operating environment.
"The department is reviewing a number of administrative functions related to managing visa compliance, including a review into allegation assessments and compliance processes, intelligence capacity and information management systems," a department spokesman said.

This appears to be a section of the PS that has totally lost its way and creating the new identity Border Protection at this time has possibly exacerbated the problem.
Our borders, are they safe, well after skipping through this audit, no our borders are hemorrhaging through ineptitude. It appears a major clean out is required, starting from the top. 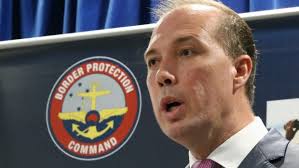 We stopped the boats, people on planes we don't care about
because we have no idea how many there are!
at January 07, 2016