Exploitation of overseas workers,backpackers etc are being ignored by Fed Gov't. Apparently they are quite happy to let unscrupulous employers rip them off.

FIRST THING ON THE AGENDA "DO NOTHING" 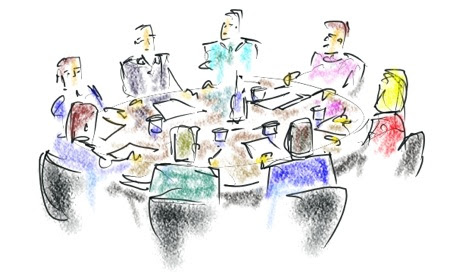 ALL THOSE THAT AGREE? PASSED UNANIMOUSLY!
Based on an article by Anna Patty

Justice Minister Michael Keenan, a key member of a high-level federal government ministerial committee? established to protect vulnerable overseas workers from exploitation has no records of any of its three meetings.

In response to a Freedom of Information request, Justice Minister Michael Keenan's office said it had no records of the ministerial committee's meetings or any correspondence relating to them.
Turnbull government's inaction over worker exploitation follows a series of high-profile cases including 7-eleven outlets grossly under paying workers, "When it comes to protecting workers' rights and cracking down on worker exploitation, the government is nowhere to be seen."

Mr Keenan's office said it had no documents, including records of any meetings or telephone conferences. Copies of any internal office briefs, covering notes or email correspondence in relation to the ministerial working group.

We therefore can only conclude that this group has had meetings that discussed nothing and has done nothing to improve the situation with regard to the treatment of these vulnerable workers.
This so called high level committee may not even exist at all!