The British don’t really do summer. It’s not necessarily that we don’t want to, but temperamentally we are autumnal, northern souls, and the imminent return of autumn is as welcoming as a comfortable old coat. For it means that we can finally ditch the pretence that we enjoy summer and its enforced, fun in the sun for another year. 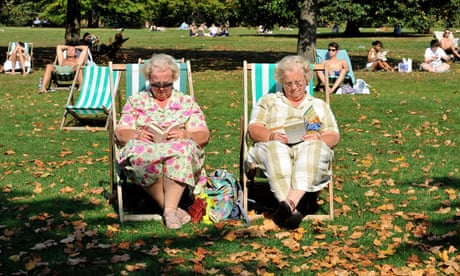 Our collective folk memory of childhood summers unhelpfully filters out the crushing boredom of six weeks off school and hoodwinks us into thinking that summer is a time of halcyon days, endless blue skies and carefree living.
In short, it makes us think that every summer should be like 1976.

The truth is somewhat different, of course. For instance, we conveniently forget that the summer of 76 produced both droughts and a record number of wasps that plagued picnics, ruined days at the beach and made walks in the countryside unbearable.

Summer tends to bring out the worst in us. Everybody is angry, tense, uptight. The mere thought of spending more time with the kids is exhausting, and as for a relaxing holiday – forget it. The beaches are jammed and many of us can no longer afford to go abroad anymore.

It’s a season that is always fraught with difficulty – it’s there in the terrible heat, the unseasonal cold, the insects, the idiot neighbours making a nuisance of themselves in their gardens when you’re outside trying to have a quiet fag; the macho, Freudian anxiety about the size of our barbecues, not to mention the utter futility of mowing the lawn. And when it comes to dressing for the summer, well, apart from celebrities, none of the rest of us really know how to do it.
Why us autumnal people pretend to enjoy the the small drips of summer that fall upon us is beyond me.
at August 30, 2016 No comments:

Police pounce on terrorists? Sorry, not quite!

A group of protesters who spent five hours holed up in the prime minister's Sydney office have been arrested for trespass.

The seven people, including six pastors and a nun, spent Monday afternoon praying and singing in Malcolm Turnbull's Edgecliff electorate office to protest against the government's lack of action in bringing refugees on Nauru and Manus Island to Australia.

Police arrived at the office around 5.30pm and waited for the group to finish an inter-faith service before making the arrests.
at August 30, 2016 No comments:

Names in Australian Census mean nothing compared to what private corporations already know, they know more about you than our government..

Here is but one example:

When Max Schrems, an Austrian privacy activist, requested to see his personal data that Facebook stored on its servers, he was mailed a CD-ROM containing a 1,222-page document.

That file, which would stretch nearly a quarter of a mile if printed and laid end-to-end, offered a glimpse into Facebook's appetite for the private details of its 1.65 billion users.

The information included phone numbers and email addresses of Mr Schrems' friends and family; a history of all the devices he used to log in to the service; all the events he had been invited to; everyone he had "friended" (and subsequently de-friended); and an archive of his private messages.

It even included transcripts of messages he'd deleted.

But Mr Schrems, who says he only used Facebook occasionally over a three-year period, believes a sizeable chunk of information was withheld from him.

Write your name. If they wanted to find your name its already on the electoral role along with your address!
at August 09, 2016 No comments:

Axe-wielding toddler has the makings of an Ekka champion, woodchopper dad says
By Alexandra Blucher

Most one-year-olds are easily entertained playing in a sandpit or with teddy bears, but Darcy Head loves nothing more than honing his woodchopping skills.

The Redcliffe toddler has been getting a lot of practice with his little wooden axe as he helps his champion axeman father Jamie Head prepare for the underhand, standing block, and sawing competitions at this year's Brisbane Ekka.

"For a one-year-old I think Darcy's technique is quite impressive, he's definitely not afraid of using an axe," she said.

Mr Head, a seven-time Queensland Champion of Champions with multiple world titles under his belt, is set to compete in his 19th Ekka this year.

He said Darcy was happiest with a tiny axe or saw in his hand.

"He's a little bit small to be training with me all the time ... but he tries to get here as much as he can."

Darcy gets involved when his father practices underhand in the backyard with his own set-up at his grandfather's house at Kippa-Ring.

"We start him on just a little wooden axe that his grandfather built for him and then in another year or so he'll probably graduate up to a little tomahawk," Mr Head said.
at August 07, 2016 No comments:

What a week in the US of A. 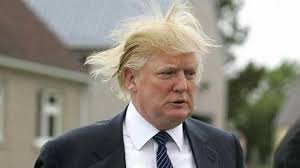 If Donald Trump abseiled into the Q Arena at the end of the Republican National Convention on a flaming rope, back-flipped onto the stage, started belting out We Are the Champions in perfect tune and confessed that his campaign had actually been a reality TV show in which we had all played a part, would anyone be surprised?

Isn't this the guy with a mirror in the toilet bowl to catch his best side?
at August 03, 2016 No comments:

Trump: The future President? He has a vacancy and its between his ears!

Just so you understand. He’s not going to go into Ukraine, all right?
You can mark it down, and you can put it down, you can take it anywhere you want.”
“Well, he’s already there, isn’t he?” asked the interviewer.

Trump doesn’t have to be Putin’s agent. It’s bad enough that he is a fan

Based on an article in The Age
Another excruciating exercise in administrative mediocrity. The result:- Important policy action constructed with inadequate consultation and too much speed.
The party that in opposition, had indignantly railed against Labor for its haste on live exports on the back of "a TV program", had done the same thing itself.
News flash: Brian Martin, but he has decided to stand down as the Royal Commissioner investigating the Northern Territory juvenile detention system.
It is less than a week since last Monday's Four Corners broadcast, and yet the nation has seen a royal commission first flagged, then "designed?", and finally instituted, all in double-quick time.
Then Captain saw there was going to be a problem and has left the ship.

Yes the Captain, Martin, was the only remaining adult in the room, he accepted that appearances in justice are vital to credibility.


The harsh conclusion is that the Turnbull government has apparently two speeds: dithering inactivity, or injudicious haste determined by its media strategy.
In the same week that Rudd has been haughtily rejected as unsuitable even to enter the selection race for UN secretary-general, those who did the rejecting, are looking remarkably similar.
The case for an inquiry was there. The justifications for abbreviating due process and for excluding the injured community, in designing that inquiry simply were not.
Had the time been taken and had those betrayed communities been incorporated, including the federal opposition, as Gillard had done when she called the sexual abuse royal commission, then unfair questions as to Martin's suitability might never have gained traction.
The reconstituted royal commission with joint heads, Mick Gooda and Margaret White, offers the way forward. It need not have been so difficult.

This government with such a slender majority has to pull its socks up if it wants to survive. They have not learnt to listen to or seek advice, they act as if the only gun they have is a blunderbuss. And we all know the damage they can cause, very severe collateral damage. Remember Abbott, he used his all the time and look how much collateral damage occurred.
at August 01, 2016 No comments: