The fear of immigrants is not new. Pauline Hanson is just following an Australian tradition? 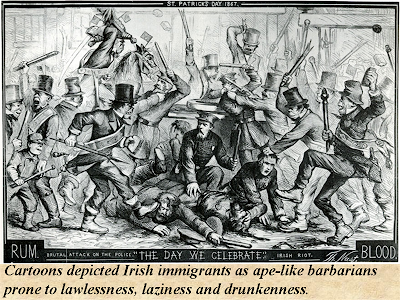 The first ethnic immigrant group to attract a concerted public and media campaign was the 4000-odd Irish orphan girls who were brought to Australia in the late 1840s fleeing the Great Famine.


The Sydney Morning Herald led a campaign against the girls, who were feared to be stubborn, lazy and of bad character. But the settlers quickly assimilated them and turned their hatred on the Chinese, only to turn on the Irish Catholics, and then on the Italians (whom we threw into prison camps during World War II), and then on the Jews. Then the Vietnamese. Then the Chinese again. And now Muslims. Often, the fear is of lawlessness (Irish insurrection, Italian Mafia crime syndicates, the Triads, Lebanese crime gangs, Islamic State). Always, it's of otherness, of cultural incompatibility.
Twenty years ago, Pauline Hanson wanted us to worry about being swamped by Asians. Bang on time – evolutionarily speaking – she now boasts that her colleagues have married Asians, but it's the Muslims who really bother her.
What does all this teach us?
Two things. One: That there is nothing un-Australian about Pauline Hanson. Whether she's in the Senate or not, this lady represents a range of instincts that is written deep in our history.
Two: That this, too, will pass. And that the grit and forbearance shown by earlier generations of immigrants in the face of the Australian national hazing ritual will, in time, propel Australian Muslims to reach the final stage of the assimilative process: "Having a go at the next lot who come".

Annabel Crabb is an ABC writer and broadcaster. @annabelcrabb
at September 18, 2016