A brilliant description of what will happen after a Hillary win by a typical(educated) Trump supporter? 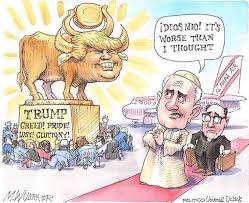 A brilliant description by a typical Trump supporter?

In the U S of A:  A Trump supporter, "The Marxists in this country have taken over our mainstream media," said Ron Childress.

"They've infiltrated our education and institutions to the point where, if we don't win now, we become either a banana republic or a Marxist regime."

Its no wonder they can be led by the nose to the Trump trough overflowing with his slogans.

Perhaps this tells us something about Trumps followers, if they can’t tell the difference between capitalism and communism they have problem.
at October 28, 2016