Naomi Klein
It was the rise of the Davos class that sealed America’s fate
Hillary Clinton’s embrace of neoliberalism was disastrous.
The only answer now is to take on the billionaires 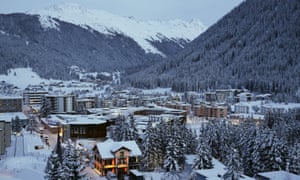 ‘Elite neoliberalism unleashed the Davos class. People such as Hillary and Bill Clinton are the toast of the Davos party. In truth, they threw the party.’ Photograph: Ruben Sprich/Reuters

This leaves out the force most responsible for creating the nightmare in which we now find ourselves wide awake: neoliberalism. That worldview – fully embodied by Hillary Clinton and her machine – is no match for Trump-style extremism. The decision to run one against the other is what sealed our fate. If we learn nothing else, can we please learn from that mistake?

Here is what we need to understand: a hell of a lot of people are in pain. Under neoliberal policies of deregulation, privatisation, austerity and corporate trade, their living standards have declined precipitously.
They have lost jobs. They have lost pensions. They have lost much of the safety net that used to make these losses less frightening. They see a future for their kids even worse than their precarious present.

At the same time, they have witnessed the rise of the Davos class, a hyper-connected network of banking and tech billionaires, elected leaders who are awfully cosy with those interests, and Hollywood celebrities who make the whole thing seem unbearably glamorous.

Success is a party to which they were not invited, and they know in their hearts that this rising wealth and power is somehow directly connected to their growing debts and powerlessness
at November 10, 2016