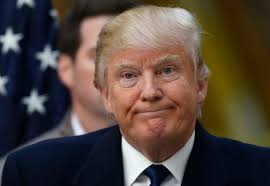 Dead, I don't believe it. show me my death certificate.
Show me my body, I'm gonna have my people check into this whole thing.
I know the press, they say I'm dead but the press are my peoples enemy every thing they say is fake.
I'm the greatest, I'm going to make it the greatest second coming you've ever seen.

The dark humour’s back, as a Jewish friend of mine reminded me a few days ago. President Donald J. Trump is on his first state visit to Israel, with a red tie around his neck he travels to Jerusalem, to open the brand new United States Embassy.

There without warning he suffers a massive heart attack. Medical people spoke of acute coronary thrombosis and myocardial infarction. But truth was the Leader was dead.
As the news broke, pandemonium spread through the country, all the way back to Washington. Waiting for instructions, federal agents nervously guarded the body.
Eager local Zionists called for the Great Leader Son of Israel to be buried on local soil. An enterprising local undertaker quickly came forward with a funeral plan. “I can arrange everything”, he said. “Best casket, beautiful flowers. Fast service. Reasonable price.”
Behind the scenes, United States officials were unpersuaded. “We can’t risk it”, said one, off the record. “Two thousand years ago, another big guy died here. Three days later, he was back on his feet again.”

Extract from:- This article is part of the Democracy Futures series, a joint global initiative with the Sydney Democracy Network. The project aims to stimulate fresh thinking about the many challenges facing democracies in the 21st century.
at February 20, 2017