Barnaby Joyce’s pork barrel is poo,poo'd after Senate Finance and Public Administration References Committee released a report that says it's a waste of money and stupid! 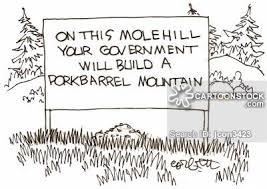 A NEW political report has delivered a scathing assessment of the process behind the Coalition’s decision to relocate the Australian Pesticides and Veterinary Medicines Authority’s (APVMA) from Canberra to Armidale, in Agriculture and Water Resources Minister Barnaby Joyce’s New England electorate.
“The lack of clarity regarding the decision-making process and the absence of a transparent selection process leads the committee to conclude that there is only one obvious driver for the decision and that is political self-interest,” the report concluded.
The Senate Finance and Public Administration References Committee’s inquiry into the government order to relocate Commonwealth agencies - focussed on the APVMA - was instigated in February and a report tabled on Friday, making five recommendations.
Top of the list was a demand to revoke the government policy order due to risks associated with moving the national farm chemical regulator to Armidale; given the critical loss of expert regulatory staff and negative impacts on its performance.
“This order is opposed by stakeholders, the agricultural sector and the regulator itself on the basis that it is 'all cost and no benefit',” the report said.
“Tellingly, the government's own cost-benefit analysis reached the same conclusion, finding no strategic or other benefits to the move.”
at June 14, 2017