Save the F-word, its served us well.The F-word is loosing its bling. 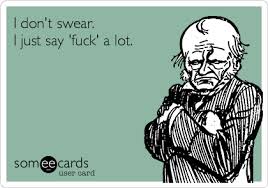 
Based on an article By James Valentine

The F-word is being destroyed, its losing its punch.


I love the word. It's my favourite word. I would use it all day, every day if it suited the moment. But now it's everywhere, once upon a time it was special, now sadly it's loosing its punch.

What are we going to do without it?

F*** is a verb, noun and adjective. It can be subject and object. You can create a sentence using only f*** in its various forms.

It can mean joy and pain. It can be used when you hit your thumb and when you win the lottery. Its humans most sacred and mysterious act, giving it just the right amount of dirty grunt it needs.

Now its loosing its taboo and becoming extremely common.

The taboo bit is fading. So its loosing its power. It's going the way of damn and bugger. There was a time when you had to write d*** and b****.

There is no replacement and the alternate C-word is only a noun whereas the F-word has a certain punch. There is no word that's as handy.

When a profanity becomes bland by over use we lose something, using it everywhere is the incorrect use of the word.

Swear words should remain swear words. When you wake up and discover yous late for a wedding and then you say f*** for about the next five minutes, that's swearing. That's the correct use of the word.

The way it is bandied about today is sacrilege.

It's sad. Because without it we're stuffed. See? I think "stuffed" is better there. It's funny, it alludes to the F-word, while maintaining and supporting the power of the "F".