Could this be our next PM? His history does not show us a statesman. How the hell do we get one from this rabble.

Is this the face of someone who cares? 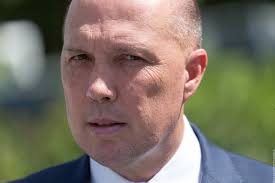 A rough history: Peter Dutton.
Dutton was made shadow minister for Health from 2008 to 2013. During that time he made no announcements, asked no questions in parliament and didn’t bother visiting any hospitals until the 2013 election.

After the election of the Abbott government, Dutton became Federal Health minister. During that time he attempted to introduce a $7 GP co-payment and was voted worst health minister in living memory by a poll of 1,100 readers of the politically conservative ‘Australian Doctor’ magazine.

In December 2014 Peter Dutton became Minister for Immigration and Border Protection, a portfolio he has handled with equal measures of malice and incompetence.

He has paid bribes to people smugglers, lied about the intentions of a woman who was raped on Nauru and forcefully returned there while waiting for an abortion necessitated by that rape. He has made false claims that refugee advocates are responsible for the self-harm of immigration detainees and mislead parliament about spying on a Greens senator Sarah Hanson-Young.

He was responsible for a bungled Border Force operation to check visas in the Melbourne CBD. He has attacked and denigrated the president of the Australian Human Rights commission for investigating the abuse of children in detention, ignored criticism from the UN, Amnesty International and Oxfam, and introduced laws to goal immigration detention whistle-blowers who report abuse.

He has seen Australia’s border protection policies become a full blown litany of human rights abuses including, but not limited to, murder, rape, torture, and child abuse.
at August 23, 2018