Enforceable human rights, freedom of speech are long overdue in Australia otherwise we will become a police state. Once we over react and create over intrusive legislation I fear we will never be able to unravel it.

Security is played as a political weapon by both sides of government, its about who can be the toughest.
They loose sight of the dangers if they over do it. It is not inconceivable that these powers of invasion of personnel information could result in extremists taking power.

Information in 2018 does not only have commercial value it has value as a weapon.

Propaganda made Adolf "Man OF THE YEAR" 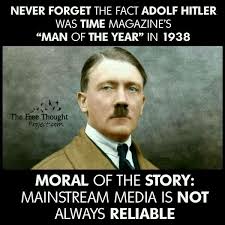 The argument that the law needs to be updated as time and technologies move on is quite reasonable.

The curious thing is, this argument is used to repeatedly ratchet up new powers for governments and secret police, while privacy law, whistleblower protections and anti-corruption legislation stay marooned in the 1980s for reasons that never quite come up for discussion.

The most important gap in our legislative architecture – the absence of a legally enforceable human rights/freedom of speech act – remains in the wilderness of major party indifference for the time being.

In the meantime, it seems we’re due for our three-monthly bipartisan force-feeding of upgraded surveillance powers.

The people demanding these new powers are the same ones who signed off on the prosecution of Witness K and his lawyer Bernard Collaery for exposing the vast misuse of espionage powers against our neighbours in Timor-Leste years ago. This is the same Timor-Leste we helped liberate.

They are the same people who provided a media organisation with the private details of blogger Andie Fox for exposing the extent of the robodebt mess.

The very same people who have set the federal police against journalists, doctors and whistleblowers for reporting on the horrors of our internment camps on Manus Island and Nauru. They deeply, truly and fundamentally cannot be trusted with the powers they already have.