Boats have turned into planes? Home Affairs Department website shows 27,931 protection visa applications were made in the latest financial year by plane arrivals. 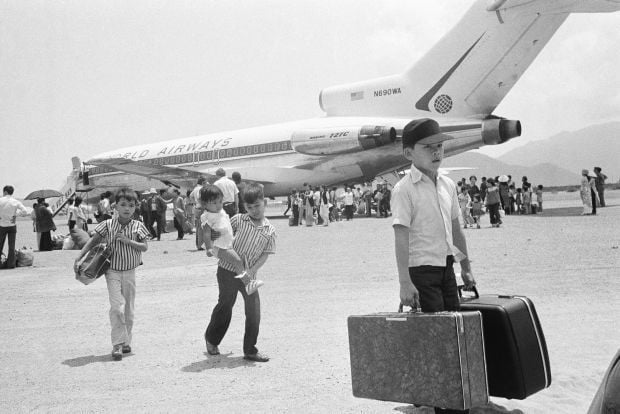 27,931 protection visa applications were made in the latest financial year by plane arrivals. (Smugglers now put refugees on planes?) What is really happening with stop the boats. How many turn backs have happened, we'll never know!

The previous record number of asylum seekers was 26,845 in the 2012-13 financial year when 18,365 protection visa applications were made for boat arrivals and 8480 for those who came by plane.

Over the weekend, the federal government continued its campaign of trying to paint Labor as “soft” on border protection, feeding compliant media outlets with allegations that admitting a relatively small number of asylum seekers from Nauru and Manus Island on medical grounds would mean people convicted of murder and rape could enter Australia. (How many of the refugees are criminals. We are never told)

But in the past four years since the government “stopped the boats”, 64,362 protection visa applications have been made by unvetted individuals who have arrived by plane while Scott Morrison and Peter Dutton were the relevant ministers.

The people smugglers are doing more business than ever.  Photo: AAP

That compares with a total of 44,581 protection visa applications for boat arrivals over the previous five years.

Former Immigration Department deputy secretary, Abul Rizvi, predicts the latest record will be broken this financial year, blaming the surge on the “chaos” in Mr Dutton’s Home Affairs department. Most of the new wage of protection visa applicants are arriving on visitor visas and then lodging appeals as asylum seekers.

Meanwhile Home Affairs is reducing frontline staff and IT contractors.

“Outsourcing visa processing will make the problem worse. Tackling the chaos in our visa processing system will cost the taxpayer hundreds of millions of dollars, possibly north of a billion dollars and take many years.

Mr Rizvi retired as Immigration Department deputy secretary in 2007. He was awarded the Public Service Medal and the Centenary Medal for services to development and implementation of immigration policy.

He has blown the whistle on protection visa applications and the resurgence of people smugglers via John Menadue’s Pearls and Irritationspublic policy website.
at December 10, 2018