The smell of rotting bodies pervades politics and there's not a single member of the government who thinks they are going to win the election.

Based on an article by Jacqueine Maley


With nothing to loose the lies become bigger and 'Public Interest' its thrown out the window. This is self preservation at all costs.

Next week Parliament will resume for two short weeks(yes its only 2 weeks) before it rises, and it probably won’t sit again until the second half of the year?  By then, who knows we will probably have a Labor government.

Already the Liberal MP's think they are going to loose the election”.

In the face of electoral failure, there is nothing stopping them from pursuing naked tribal self interest.

If they're going to leave the joint, they may as well trash it for the incoming lot.

"The temporary Prime Minister”(Scott Morrison) as he's being described, presides over what looks increasingly like a caretaker government and little 'care' is being taken on how its being run. One things for sure its not being run with the public interest in mind.


Consider this week’s events: from Home Affairs Minister Peter Dutton we had a transparent scare campaign about the consequences of passing independent Kerryn Phelps’ “medivac” bill, which would curtail ministerial discretion and give more weight to the advice of doctors on whether to transfer asylum seekers back to Australia for medical treatment.

In apparent service of that scare campaign, a reported classified briefing comprising advice from ASIO and Australian Border Force was leaked to The Australian newspaper. The advice reportedly warned that the passing of the bill would lead to hundreds of asylum seekers coming to mainland Australia using medical transfers. (This morning on the insiders we were told everyone would be coming to Australia, so they're all sick?) 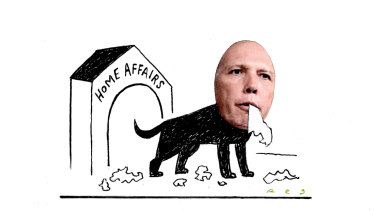 The Prime Minister added helpfully that the bill could lead to rapists and murderers (a trumplet) gaining access to our golden shores.

We already know how much Dutton values ministerial discretion - he has used it freely to allow two European au pairs entry to the country when stopped at Immigration, for mysterious reasons he has declined to share with the public.

There is certainly no mystery as to what is going on here: Dutton - who looks very likely to lose his seat at the election - is playing for his political life.

The Home Affairs Department has reported the leaking of the classified information to the Australian Federal Police for investigation. (could this be someone in-house keeping their job safe?)

Are we numb from the last brutal decade of politics, has it made us forget what happened with the so called intelligence briefings during the Howard era.

If there is one thing that period taught us, it was to beware of politicians brandishing intelligence.
at February 10, 2019